Five-year-old Abdullah, who his mum says “always has a smile on his face”, is in desperate need of sensory items to help him relax and feel safe.

The little lad has autism, global developmental delay and behavioural difficulties and his condition means he can have multiple outbursts on a daily basis. The youngster, who has difficulty sleeping, regularly gets easily overstimulated by his surroundings, which can be very overwhelming for him.

Abdullah, from Essex, has no danger awareness and is prone to banging his head and biting things as a result of his over-tiredness. The little boy’s high energy levels mean it’s tricky for his family to also get the rest they desperately need.

Children Today provided half of the amount towards the equipment, but the family is still short of £529.40 to fully fund Abdullah’s Safespaces accessories.

Sensory equipment is proven to help those affected by autism who have difficulty with sensory processing and struggle to tune out unnecessary sensory input.

His mum, Janara, is certain that having a projector to cast mesmerising and calming patterns on her son’s bedroom wall and a LED, colour-changing fibre optics kit, will help to put him in a relaxed mood so he can get to sleep with ease. If he’s getting a good night’s sleep regularly, this will in turn have a positive effect on his behaviour.

“This equipment would be truly life-changing for us all. It’ll create a place where he’ll be able to calm himself, engage in activities without harm and without feeling frightened and overwhelmed because of the peaceful effects of the sensory environment.

“I’m sure it will have a positive impact on him physically, emotionally and socially. It’ll provide a safe space for him to explore and it’ll also help me to control the stimuli that he is exposed to in order to manage his behaviours, and prevent him from becoming overloaded with stimuli. I’m hoping it’ll help create a better sleep routine for him too.” 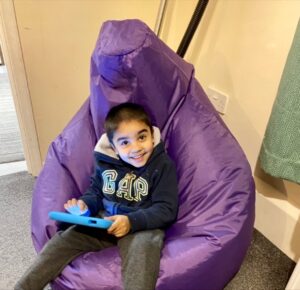 Little Abdullah, who is non-verbal, has to have constant supervision to ensure he isn’t at risk of injuring himself. Janara explained how her little boy, who loves being around people, doesn’t know how to play and often has unpredictable meltdowns. She adds:

“He’s always on the go, he likes to jump and climb on the open bannister. So we have our hands full a lot of the time. The projector in particular will help to calm him, as he loves to watch moving things.”

The equipment will have a knock-on effect on the whole family as we all know the importance of getting a good night’s sleep.