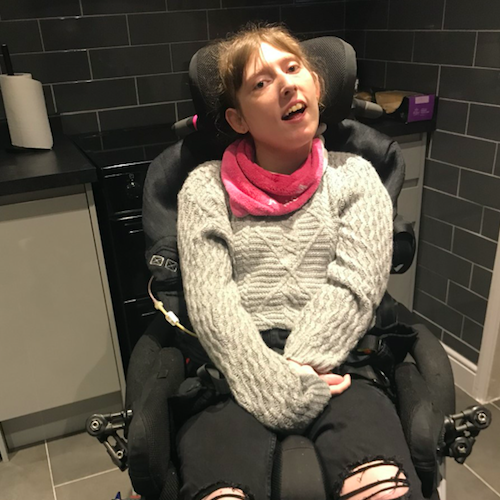 Life for 22-year-old Abbie Monks and those around her changed for the better when she received funding from Children Today for an attachable power pack for her wheelchair.

At the time Abbie, who has epilepsy and Cerebral Palsy which affects all four of her limbs, was experiencing a milestone – leaving her secondary school. The arrival of her power pack went hand-in-hand with her opportunities as they were expanding. Abbie, who lives in Hartcliffe, Bristol, received her first power pack a few years ago and now Children Today has supported her again with funding for a brand new replacement.

Abbie’s mum and dad said the power pack has enabled their family to go to places they wouldn’t have been able to before receiving the extra boost. The weight of Abbie’s chair made it a difficult task to push manually, especially uphill and for long durations of time.

The equipment hasn’t just enhanced life for Abbie and her family, but that of her carers too. Abbie attends a day service called Design 4 Life – which supports adults with learning difficulties. Her parents say:

“She’s got a great deal more independence in the community thanks to the power pack.

“Abbie loves the outdoors and is able to go on lots more walks and outings with her day centre, including boat trips – which she’s a big fan of. The power pack helps take the pressure off her carers and for us as a family too.”

Speaking of life before the power pack, Abbie’s mum and dad explained how a day out at one particular zoo would be tainted as its carpark is on a hill, making it extremely difficult for the family to push Abbie up. They described how one family member would have to leave Abbie with another at the bottom of the hill and then drive down to meet them. But, this moment of separation was very distressing for Abbie. They add:

“She can now go up the ramp which is a god blessing in itself. She can go anywhere now and the motor does all the work!”

Abbie’s story demonstrates that Children Today are able to support a child and young person a number of times throughout their life, as their needs change. Families are able to apply to Children Today for funding for a specialised piece of equipment once every twelve months.

One of Abbie’s carers at Design 4 Life, Sarah Smith, said having the power pack means they don’t have to worry about obstacles like hills or uneven terrain on days out anymore.

Sarah, who has been working there for almost four years, says:

“Abbie is able to do a lot more than she was able to before. Her chair is quite heavy making it difficult to push without the battery pack. Some of the roads around the centre are sloped and we’d often be fighting with the chair, now it just glides along.

“Everything’s so much easier, we can just focus on planning the activity for our days out instead of thinking ahead about whether it would be possible to get around. Going uphill isn’t a problem anymore and neither is going on long journeys. Beforehand we’d have to alternate between who pushed her chair. The power pack lasts all day until she gets home so that’s great.

“It’s given her a better quality of life, she can just go, go, go now.”