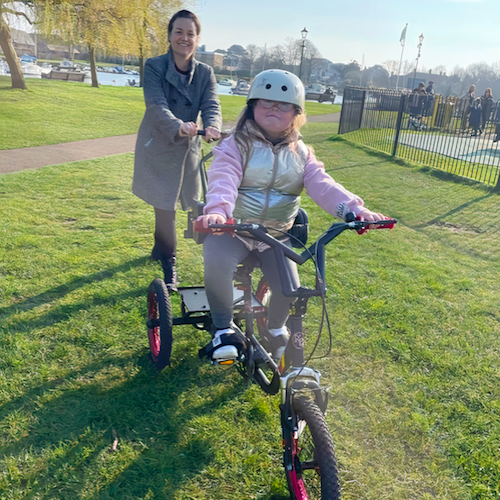 Chloe is experiencing a new sense of freedom with her new, adapted trike.

The seven-year-old, whose mum describes as “exceptionally determined”, was provided the life-changing piece of equipment thanks to Children Today.

Before receiving the trike, Chloe, who has Down’s syndrome, relied on her mum to push her around in her pram. But, now the pair, who live in Dorset, are getting out and about and having fun together with Chloe’s new wheels.

Chloe’s mum, Nichola is confident that her little girl will be out enjoying her trike every day this summer. She comments:

“Since we’ve received her trike it’s opened up the world to us. We were trapped during the pandemic and we’re still feeling slightly confined but we’re getting there and it’s a huge step.

“This is exactly what we needed; freedom and the feeling of the wind in our hair!”

The Mission Cycles trike, which is providing Chloe and her mum with unlimited amounts of joy, has been a lifeline for them after a rough patch during lockdown.

As Chloe has low muscle tone and needs lots of rest breaks in between walking, the pedalling required is helping to strengthen her legs and will have untold benefits for her core strength. 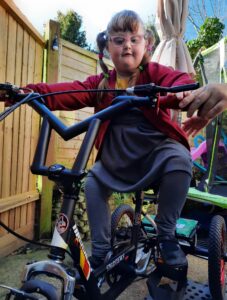 Nichola, who is a single mum, explained that a common trait of someone with Down’s syndrome is a large stomach, due to lack of muscle strength in that area, but the trike will help with this.

Along with having a huge impact on her physical health, the specialised trike, which is set to last her a lifetime, has benefitted not just Chloe’s but Nichola’s mental health too.

Now Chloe can experience what every child should be able to: fun, freedom and a sense of independence. Nichola described how her little girl, who has limited speech, is being vocal about other cyclists she sees out and about, she points and shouts: “Chloe same! Mummy same!”.

Nichola, who is teaching her daughter to steer and taking her to pedal ability classes, adds:

“She’s pedalling backwards at the moment but we’ll get there! Every time she sits on it she smiles and you can sense that she feels so free. We’re making cycling a priority at the moment and she’s loving it!

“This is going to have a massive impact on her disability and is actually giving her and us an ability.” 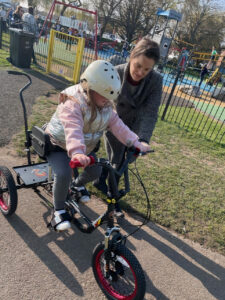 The future is bright when it comes to Chloe’s pedalling ability and the overall improvement of her strength.

Once the youngster gets the hang of pedalling and steering, Nichola hopes to ride side by side with her on bike rides together. Little Chloe will also be able to join her school friends on the commute to and from school, increasing her social inclusion.

Next year the pair hope to go further afield and take Chloe’s trike in the back of their van and experience the joy of using it on holiday. Nichola says:

“The freedom that’s going to come with something that she can control herself, instead of me having to push her along, is going to open up so much for her.

“It’s going to be so magical for her to be able to get to school with all her peers who have bikes as well.

“She’ll be eight in September and the average child learns how to ride a bike much earlier than that, so this is going to be a massive step for her in terms of her independence.

“We’re also aiming to bring it on trips with us so we can explore nature together, maybe up and down the coastline. It’s going to be amazing.”

Due to Chloe’s global developmental delay, Nichola explained that she doesn’t understand that she has mobility issues. But, she believes the trike will allow her to understand the process of getting from A to B on her own.

“We are eternally grateful for the funding from Children Today for this wonderful equipment, it’s beyond words!”