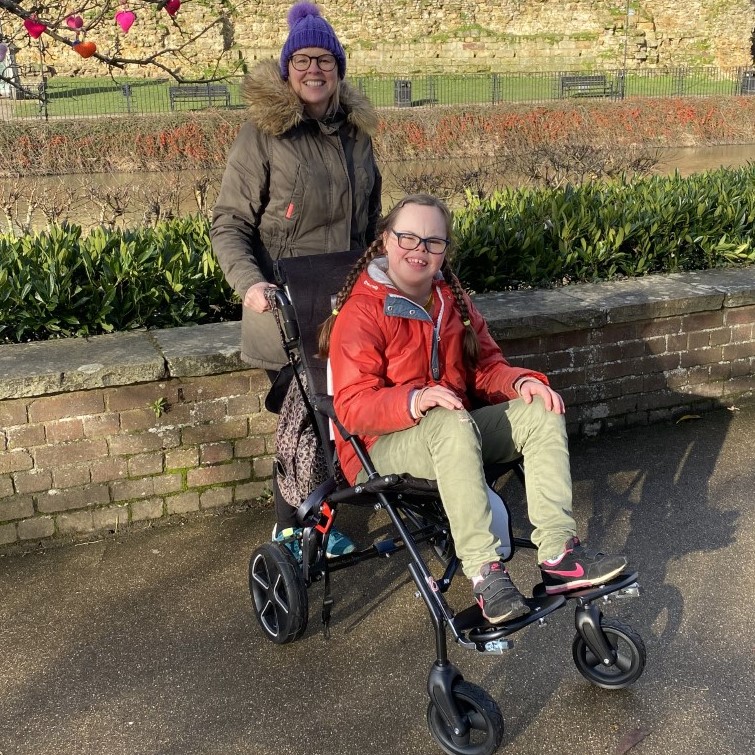 11-year-old Erin, who has Down’s Syndrome, and her family are finally able to get out and about more and live the active lifestyle they love since receiving Erin’s adapted buggy.

Erin’s family approached the wheelchair service just before she started school, and they provided the family with a Maclaren major buggy, which is specifically designed for children with special needs from about the age of two to eight, depending on their size.

“By the age of eight, not only was it worn out, but she had also outgrown it. The wheelchair service said that our only option was a wheelchair, which just didn’t suit our needs as we have a very active, outdoorsy lifestyle as a family.

“When we looked into the cost of a bigger, suitable buggy, we chose to buy another, second hand Maclaren major, which was considerably cheaper, even though she was too big for it. We carried on using this for another two years until it also started to show signs of wear and tear and we just couldn’t use it any more, due to Erin’s size.

“In early 2020, during the first lockdown, the buggy finally gave up for good, meaning the family were virtually confined to the home. A short while after this a fellow parent, who had received charity funding for a buggy for her daughter, with similar needs, suggested that I apply.”

Since Children Today provided a suitable adapted buggy, Erin, Lisa and the family have been able to start enjoying life outdoors together as a family again.

“Erin didn’t start walking until she was three-years-old and also has hypermobility and hypotonia, all of which means she can be a bit wobbly on her feet. She struggles standing still and is prone to falling over. She also tires very easily.

“So although she can walk and run with the carefree enthusiasm of an 11-year old, she gets completely exhausted, which is why we need the buggy.

“It might seem like a wheelchair is the obvious solution, but they are actually very cumbersome. I find them hard to push and not very manoeuvrable, so they’re not suitable for long walks or off road outings into the woods or beach.

“We’d also have to get a bigger car to be able to fit a wheelchair in the boot, which just seems ridiculous!

“Since getting Erin’s new buggy we have a whole new lease of life as a family, it’s been literally life-changing. We’ve been going to the coast a few times a month and making regular trips to the park. The first lockdown was pretty grim, because we’d been used to getting out and about a lot but it was impossible during those first few months in lockdown as Erin would tire so quickly. 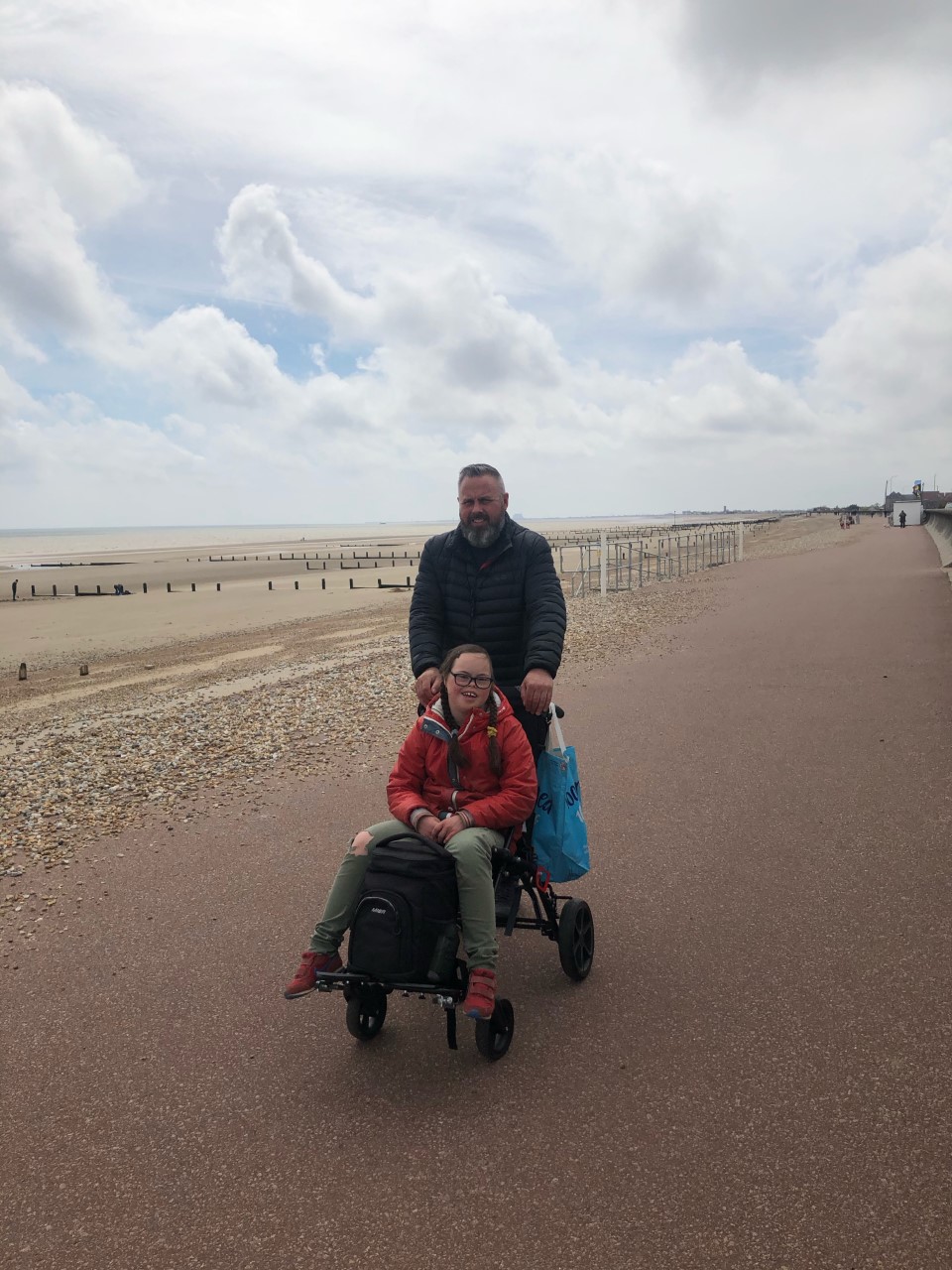 Erin enjoying her new buggy at the seaside

“Ordinarily, we’ll often walk into town to go shopping or swimming but we found ourselves having to drive a lot more when we didn’t have the buggy. The buggy also gives us the option of walking to school.”

When asked what Erin enjoys aside from the outdoors Lisa says:

“Erin loves singing and dancing. Right from being a baby she’s always been involved in singing and dancing groups and she still attends a couple of classes now, one for children with Down’s Syndrome and the other is an inclusive dance club, which focuses on creative story telling through dance.”

Erin’s older sister, Gabby, also shares her love of music and dancing and is currently volunteering at one of Erin’s dance groups as part of her Duke of Edinburgh award. Lisa continues:

“Erin and Gabby’s bond is so special. Erin is unbelievably proud that her big sister is helping at her dance classes and is thrilled that they can spend even more time together again, now we have the buggy!” 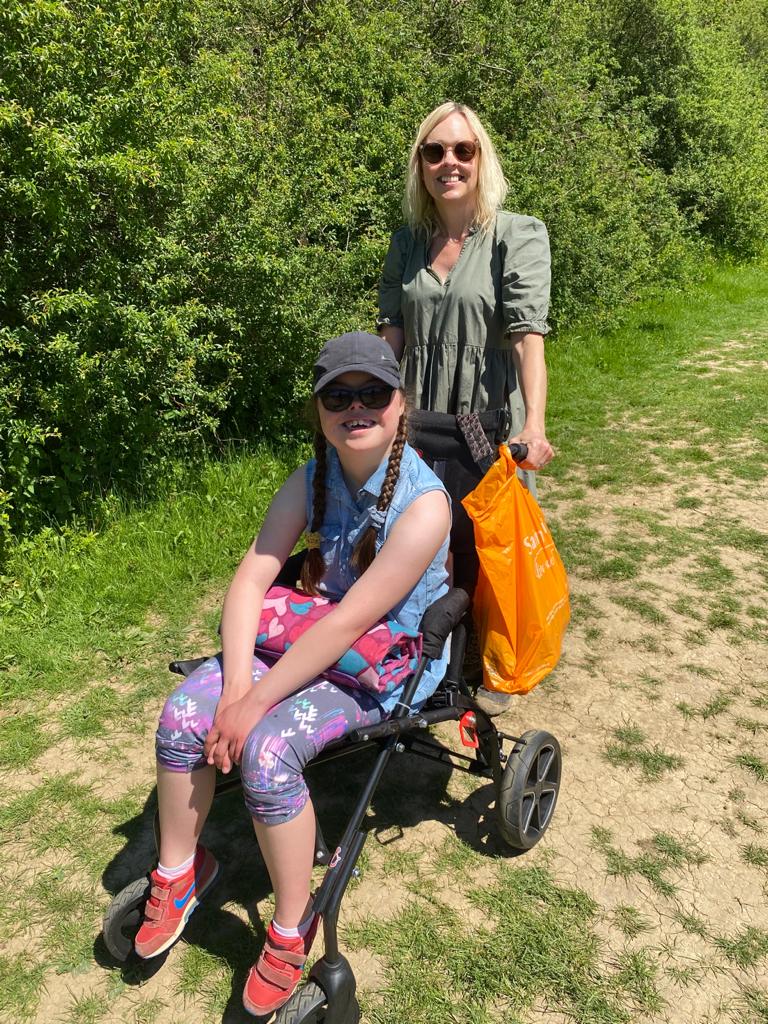