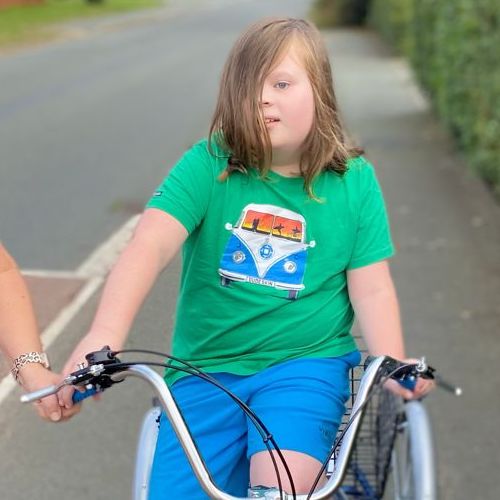 Flinn, who his mum describes as “affectionate and smiley”, received the ultimate gift on his 11th birthday.

The 11-year-old, who has autism and the developmental age of a four-year-old, loved trying out the tricycles at his school, which gave his family the idea of getting him one of his own.

Despite trying to have a go on his sister’s bike, Flinn’s unable to balance on an average bike, so couldn’t ride independently. His mum, Lucy, explained when Flinn tried it out, it was very difficult to take her little boy’s weight whilst also assisting him with moving forwards. 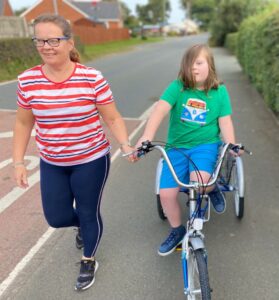 When Flinn’s Mission Cycles trike arrived, he was so keen to jump on it and go even before all the packaging had been taken off it! Lucy says:

“It couldn’t have been timed more perfectly. He’s been loving it; he’s got a big smile on his face whenever he sits on it.

“I bought him a couple of other bits and bobs for him to open on his birthday and he was so obsessed with the trike that he didn’t even touch them!

“His interests are fairly limited, so just seeing him having fun, moving around and getting really excited about something was amazing. It’s so lovely as a family to see him motivated and enjoying himself.”

During the pandemic, Flinn, who is non-verbal, has ADHD and learning difficulties, had one of his favourite activities – swimming – taken away from him, as pools were closed across the nation. But, fortunately his school remained open throughout, keeping him mentally and physically stimulated. 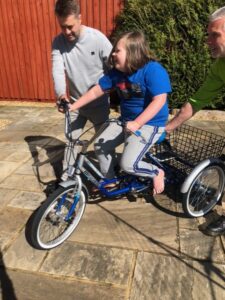 Flinn enjoying his trike, which he received on his birthday

Lucy explained how, before having the trike at home, it was hard to engage Flinn in outdoor activities as he’s very iPad-driven. She adds:

“With the trike, he’s quite happy to surrender his iPad and put it in the basket at the back.

“He does love to walk but it’s great that we can now engage him in another form of physical exercise which is also fun for him.”

Flinn’s small adult trike, which his grandparents also contributed towards, has an adjustable seat so is set to last him many happy years to come.

Flinn with his mum, Lucy

While Flinn is currently enjoying riding around the quiet roads of his village, his family are planning to take his new equipment on a trip away in his grandparent’s camper van in the near future.

“The physical exercise element of it is really important. Anything we can do to engage and motivate him to take part in physical activity is a bonus, so his trike is absolutely perfect for that.”