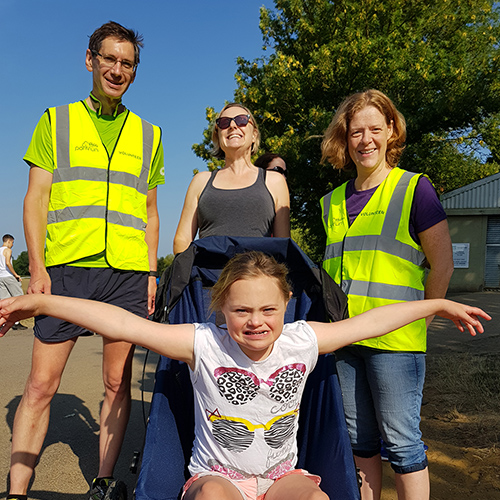 An adapted pushchair that we provided funding for has been life-changing for a local eleven-year-old girl with down’s syndrome.

Ines, who lives in Tonbridge, has severe learning disabilities and needs constant adult supervision as she has little awareness of danger which can expose her to risky behaviour such as straying into the road. As an active child she needs outdoor physical activity daily to remain happy and calm but her family can only let Ines leave the house once she is safely strapped into a specialist buggy. However, after years of use, her old adapted pushchair was falling apart which meant getting out was a lot more difficult for the whole family.

After reaching out to the NHS for a replacement, the family were told they could only receive a wheelchair instead due to her age. Unfortunately, this would have been unsuitable for Ines’s needs as the family often have to act fast when she is in danger and a wheelchair would be too cumbersome to react as quickly as required. Ines’s mum Carolyn comments:

“Ines has very complex needs – her dyspraxia and hypermobility of joints means she gets tired very easily and will even go on strike, dropping to the floor. Now she is too big to pick up and without a buggy we’d just be stranded. Her sensory needs also mean she can find busy places overwhelming, even resulting in meltdowns, but her buggy gives her a safe space she can retreat to, calming her down.”

With a new buggy costing almost £800, the family reached out to the charity Children Today for funding as they would not have been able to afford it otherwise. Carolyn adds:

“When Children Today said they would provide a grant to pay for the buggy we just couldn’t believe it. It arrived a few months ago and has been life-changing for us all – even better than expected! With her old buggy we had tried to take it across rougher terrain or grass but it was a complete slog. Ines loves the outdoors so much but it was difficult to explain why we couldn’t go to certain places because of the ground – so we would sometimes feel trapped as a family.

“Just having the buggy to go anywhere has made a huge difference already as we can all go out together – even a trip to the shops could be difficult before. It’s brought the whole family much closer together as we can do much more activities for the first time as a family.

“In fact we recently did parkrun in Tonbridge – Ines loved being pushed around the course in her new buggy. She blew her kazoo all the way round, high-fived everyone going the other way and shouted ‘Running!’ at everyone when she wasn’t kazooing and was so excited at the end that she threw her kazoo in the river! Her older brother also really enjoyed getting to push her in the buggy.

“Ines is so sociable but has found it difficult to have social experiences as she can get overstimulated. This buggy has not only encouraged her to have exercise but also helped her interaction with people. We’ve had a summer of priceless memories and, as this buggy will last Ines for years, know there are many more to come.” 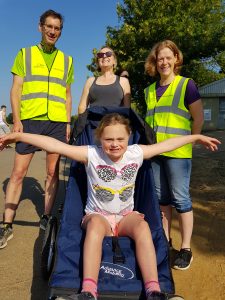 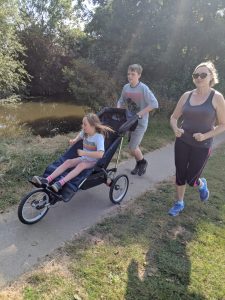 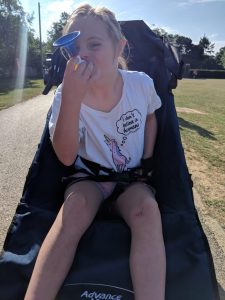