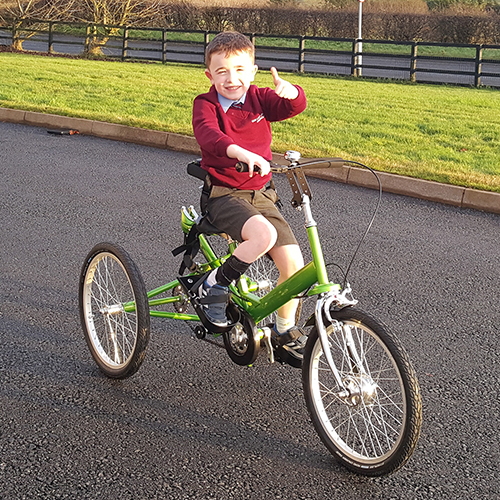 A seven-year-old boy who was seriously injured in a lawnmower accident four years ago, has been given the chance to ride a bike for the first time after we provided a grant for a specially adapted trike.

John James McElduff, who lives in Omagh in County Tyrone, suffered a traumatic injury to his right foot after an incident involving a lawnmower just before his third birthday, which saw him lose over 90% of his ankle bone.

As his injuries were so severe, John James was taken straight into Intensive Care where he had skin grafting. It was two weeks before the doctors could operate and he then underwent over twenty surgeries in just a few months. John James even had to be given an anaesthetic every time there was a dressing change as he was in so much pain.

His family were told that he may be able to walk again, but would never be able to pedal a bike or run. John James’s mum Patricia comments:

“Thank goodness he was too young to remember the accident as it really was horrific and left him with devastating injuries. The doctors said they’d never seen an injury like this before and that he would have no bend in his ankle which meant he would never be able to ride a bike. The damage also meant his injured leg was left shorter than his other leg.”

After intense rehabilitation John James was able to start moving around independently using an ankle foot orthosis, but this meant the small amount of bone left from the accident has now gone due to wear and tear. His physiotherapist recommended purchasing a specially adapted trike to help increase his core strength so mum Patricia arranged a trial for a Tomcat trike with supplier John Preston & Co Ltd.

The trike had special adaptations to support his weaker leg, enabling him to pedal and got a better than expected reaction from John James.

“The trial went incredibly well – in fact John James asked us if he could please keep the test trike he loved it that much! As it was going to cost over £2,500 though we were hesitant as we knew we couldn’t afford it despite knowing what a difference it would make to John James.” 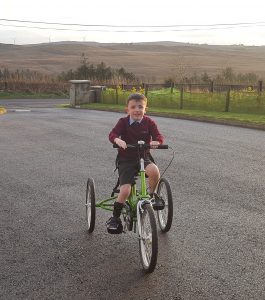 Patricia reached out to a number of charities and was awarded funding from our charity Children Today and the Bopuran Trust  “John James was over the moon when we told him he’d be able to get his trike and we just can’t believe the difference it has made to him. Physically it’s really helping make his leg stronger as he’s doing physiotherapy himself every day without realising – whilst he can only walk short distances he was even able to take part in sports day this year!

“The trike has also really helped build his self-confidence back again. After his accident John James didn’t want to even look at his leg or for anyone to come near him. Now he’s much more willing to go outside and play whereas before he would want to stay in. He can go out with his friends and brothers and sister and ride his trike alongside them which is great for building his social skills back again and when he has friends over it’s usually the first thing he shows them as he’s so proud of it! I never thought the same bubbly boy he used to be would ever come back – and it’s thanks to this trike!”

You can listen to Patricia’s interview about John James on BBC Radio Foyle on 25th July 2018 by clicking on the play button below.

You can also watch a short clip of John James on his trike here: