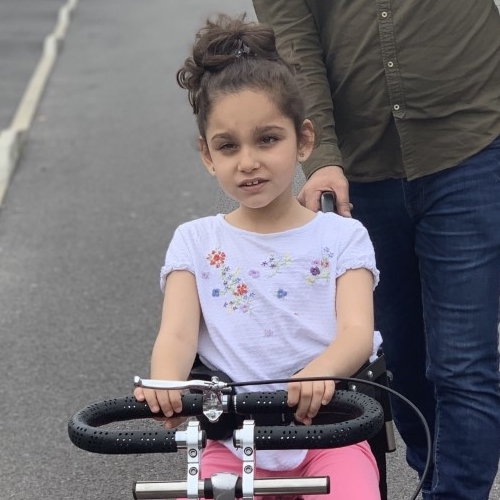 Jury Ismail has a rare genetic condition called CBLC disease which means she has very limited mobility as she cannot walk and is barely able to speak.

The seven-year-old has now been given the hope of walking in the future after receiving a specially adapted trike thanks to funding from Children Today.

Jury, who lives in Liverpool, previously had to use a specialist pram or walker if she wanted to go outside which was often very frustrating and stressful for the whole family as Jury didn’t like using such restrictive pieces of equipment.

The little girl’s physiotherapist recommended purchasing an adapted trike as it would not only provide great physical exercise to strengthen her leg muscles but also help her feel more independent when going outside with the family. However, the cost of the specialised trike was too prohibitive for the family.

“We knew an adapted trike would make a huge difference to Jury’s life but as it would cost over £1400 we simply could not afford to buy it as I’m a full time carer for Jury.”

After reaching out to a number of charities for help, Jury was awarded funding from Children Today and another charity and received her special red trike just a few months ago. Now, her parents said in the short time she’s been using the trike her legs muscles have become stronger. 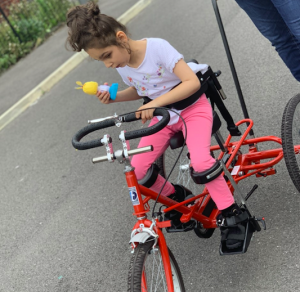 “We were so grateful to get the funds we needed to pay for this trike as it has been life-changing for us. Now we can go out to the park together as a family which we just couldn’t do before.

“The trike has special adaptations to support her body which means she’s kept safe but does not feel overly restricted. As we push the trike for her, Jury’s feet move on the pedals making her legs move so she feels like she’s cycling herself around and exploring her surroundings. This is great as it’s helping her feel more independent than before so she’s happier and calmer which gives us great peace of mind.”

The physical benefits of the trike have also been better than expected making the family’s hope of their daughter being able to walk a real possibility. Harvin adds:

“This trike has been even better than I expected it to be. From just a few months of using the trike her legs are getting much stronger and we now hope that she may be able to walk in the future which is our dream.

“She gets so excited when on the trike although she can hardly talk she says ‘good’ when she’s on it so we know she’s pleased with it! Jury loves it and we do too. It really has brought so much happiness to our whole family.”