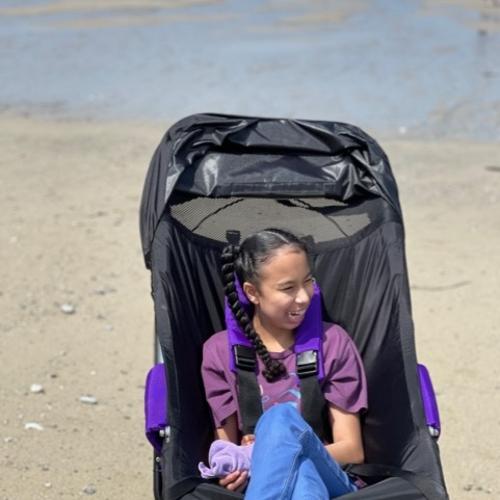 14-year-old Neave is finally able to enjoy days out with her family to the beach and the woods with her new, specialised buggy.

The little girl, who has global developmental delay, dyspraxia and a chromosomal deletion syndrome, which is a neurological disorder affecting her movement and coordination, was limited on where she could go as her wheelchair was unable to move over uneven ground.

Before the buggy, the last time Neave and her family attempted a visit to the beach, the teenager’s dad had to carry her on his back as her wheelchair became stuck in the sand.

Over a thousand pounds in online donations poured in for the teen, whose parents call their ‘Little Miss Sunshine’, after we launched an appeal to raise the remaining funds for Neave’s adapted equipment. 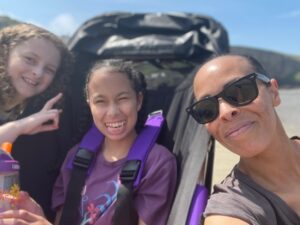 With Neave’s new, three-wheeled buggy, the teen and her family can do so much more together and are no longer held back by the limitations they faced before.

Natasha, Neave’s mum, branded the all-terrain buggy as the best thing that’s happened to their family this year. She says:

“Our daughters’ mental health is very important to us, it’s something we’re very aware of. We would like both of our children to be as healthy physically and mentally as they can be and this is a huge push in the right direction for Neave – knowing she has the ability to ask ‘can we go here?’ and for me to reply ‘yes!’, you can’t put a value on that. It’s a wonderful feeling to be able to say we can do something without limits. 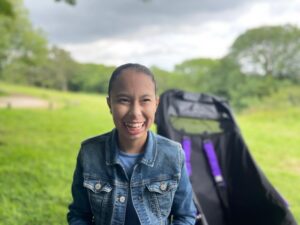 Neave, who Natasha describes as a ‘beautiful girl with a beautiful personality’, was born with positional talipes. From the age of six, her left foot progressively began to turn inwards, making it difficult for her to walk.

A couple of years ago, an operation to flatten Neave’s foot, which the family had high hopes of improving her walking ability, didn’t work out as planned. Neave, who communicates using Makaton sign language, verbal prompts and gesturing, has been unable to walk since.

During lockdown the family found themselves stuck at home and were limited on where they could go with Neave’s wheelchair, despite living so close to the woods and the beach, they were unable to access these places together.

Since receiving the buggy, a world of opportunities has been opened up for Neave and her family. The equipment, which is specially adapted to fit Neave and can attach onto the back of a bike, is set to last her many happy years to come and is enabling the family to spend quality time together out of the house.

Not only has the equipment given the whole family’s mental health a big boost but Neave, her little sister and her parents will all be able to go on family bike rides for the first time in their lives.

“It’s been fantastic. We’ve gone out as much as we can – weather dependent. We don’t have to worry about where we can go anymore because I know that we can do it with the buggy with the reassurance that there will be no problems whatsoever. We’re having so much fun with it.

“She’s over the moon with the buggy and so are we! When she’s sat in it – it’s like she’s living in the lap of luxury!

“When we’re out with Neave, she usually likes to get out of her wheelchair immediately to sit on the bench with us when we stop. But this time she said ‘no, I’ll stay in my buggy, I’m comfy!’ To be honest I would have done the same! The look on Neave’s face when she’s in her buggy is absolutely priceless.” 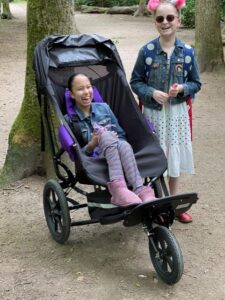 Natasha described how the buggy coped amazingly over the bumpy terrain of Tehidy Woods with the help of its suspension. The equipment’s wheels can also be swapped for ‘beach wheels’ which makes it easier to navigate over thick sand dunes.

The children’s charity, Children Today, supported the family from Cornwall with help towards the cost of the equipment and the remaining £1,078.00 was raised online with the help of the local community.

Speaking of the kindness of strangers, Natasha explained how both her and her husband were “gobsmacked” by how quickly the donations came in for their little girl. She adds:

“We’re quite a humble family and so tend not to ask for support. For that to be repaid with such generosity and so quickly was so heart-warming and absolutely restored our faith in humanity and in the kindness of those around us.

“I cannot thank people enough. If there’s anything I can do to help those who helped us, in any way I can I absolutely would and my husband has said the same.

“It’s been the most amazing experience, ever.”