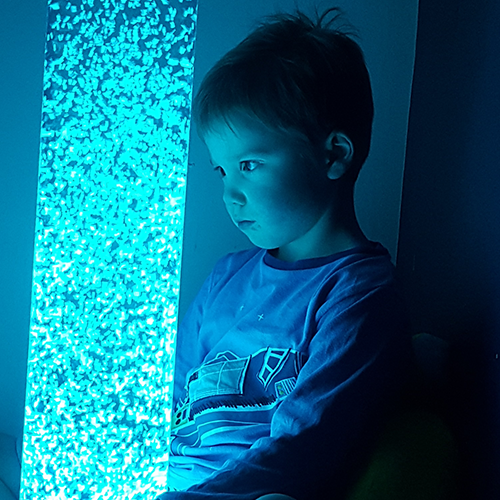 Seven-year-old Oscar was diagnosed with Autism Spectrum Disorder, higher functioning, with complex sensory needs when he was aged just three and a half years old. His condition means that he has significant sensory needs, being hypersensitive to noise, touch and visual activity where he can rapidly feel overloaded with information. When this happens, Oscar experiences anxiety and stress, which exacerbates his need for regular movement breaks in order to regulate his body. This anxiety also manifests itself in behaviours that challenge, which can be very difficult to manage, such as a need to bolt or a need to be removed from an environment to a quiet space for his safety and to calm.

After going through a difficult time at his first primary school and a few months when he was home-schooled, Oscar moved to a new school earlier this year with a specialist autism unit. The unit not only has a soft play room but also a ‘calming’ room which featured a special ‘touch’ wall and a bubble tube – the first time Oscar had seen and interacted with one of these!

“When Oscar first saw that bubble tube his whole face totally changed. His eyes lit up in a way I’ve never seen and he was just transfixed with calm as soon as he saw it”, his mum Alison comments.

“I’ve never seen his face filled with such calm joy like that and just couldn’t believe how amazing his reaction was – we knew that if Oscar could have a bubble tube at home it could be life changing for all of us.”

After the family’s doctor suggested that there could be a charity out there that could help provide funds for equipment like this, Alison did an online search and found our charity Children Today. She adds: 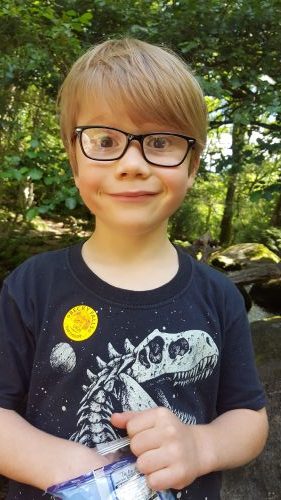 “Whilst we knew we needed to create a sensory area at home for Oscar’s wellbeing we just couldn’t afford to buy this kind of specialist equipment ourselves. We contacted Children Today with a lot of trepidation as we knew if they couldn’t help provide funding then there was no way we would be able to pay for a bubble tube ourselves as it was over £1000!”

After we approved the family’s application for the full amount requested of £950, the bubble tube was delivered just a few weeks later, having a great reaction from Oscar straight away!

“Oscar is on medication to help him sleep as he finds it very difficult to get settled at bedtime often taking hours to get to sleep. Whilst his bedtime would be at 7.30pm he would stay awake and wouldn’t be able to go to sleep until late, sometimes as late as 1am. The ceiling would often shake throughout the evening from him jumping up and down!

“The bubble tube has filled his bedroom with a sense of calm and he gets settled much quicker in the evening now as it’s reducing his anxiety, which is much better for his wellbeing. It creates such calm for him that for the first time we hope we’ll be able to consider gradually taking him off the medication.

“The bubble tube has made Oscar feel special and has transformed his bedroom into a tranquil and safe haven for him and it’s something that will have a positive impact for years to come. In fact, it’s had a huge impact on all our lives – including his little brother Joseph.

“There are so many families out there that need this kind of life-changing support from charities like Children Today and we want to say a huge thank you to everyone for your support and helping make our son so happy!”

And of course the last word should go to Oscar – who told us:

“Thank you for my bubble tube. I love it even more than I like it! It helps me go to sleep at bedtime.”