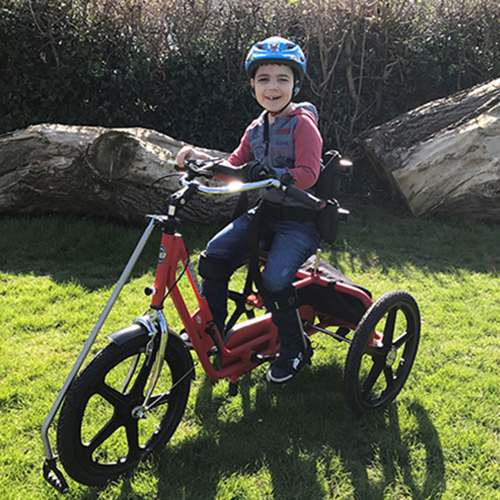 Rhys was born with the rare neurological condition Sturge Weber Syndrome and has already had to undergo a number of brain operations in his young life to try and control his epileptic seizures. As a result of the seizures and the side effects of the operations, Rhys also has hemiplegia which means he has no motor function in his left hand and severely limited use of his left leg. 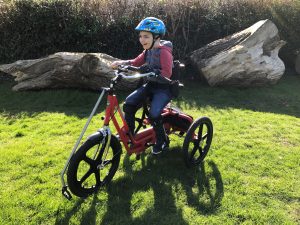 Because of his condition he has a much higher risk of falls than other children combined with significantly reduced balance and coordination. This meant he was unable to safely ride a regular bike and had to miss out on bike rides with his brother Kaias and his friends.

Adaptations on this special trike include a specialised mitten so that Rhys can hold the handlebar with his left hand (which otherwise he would be unable to do) as well as foot plates, special knee and belt to help Rhys sit on it safely and securely. Rhys can also be pushed along by his mum on it when he gets tired.

After Rhys’s Occupational Therapist recommended the trike to help give Rhys the ability to exercise more regularly, increase his independence and improve his social interaction amongst family and friends, Rhys had a fitting for the trike and immediately loved it. Rhys’s mum Carly comments:

“The trike cost over £1000 which would have been a huge ask for me but after seeing Rhys’s reaction when he first tried the trike I knew that by hook or crook we would have to find some way of funding it.”

Carly applied to us for funding and was delighted when we provided a grant for the full amount of £1300, with the new trike arriving just a few weeks later. 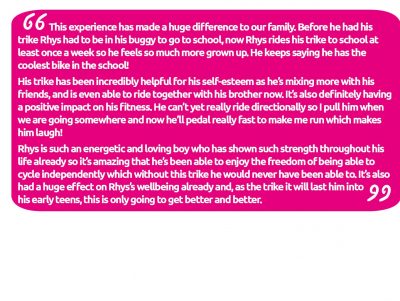