Severely autistic teen, Sam Coley, and his mum can now get out of the house safely on his new, specially adapted trike.

With Sam “fabulous” new wheels the pair can experience a change of scene, much-needed fresh air and socialisation when things become too overwhelming at home for the 14-year-old.

Before the trike Sam, who needs 24-hour supervision, was prone to running away when out with his mum as he has no danger or spacial awareness.

Something as simple as going for a walk is tricky for the family as Sam, who wears ear defenders, is highly sensitive to noise.

Now Sam and his mum, Claire, can enjoy the liberty of getting out of the house with ease. With Sam, who loves the outdoors, securely strapped into his specialised equipment Claire has peace of mind knowing that her son is able to enjoy himself safely. 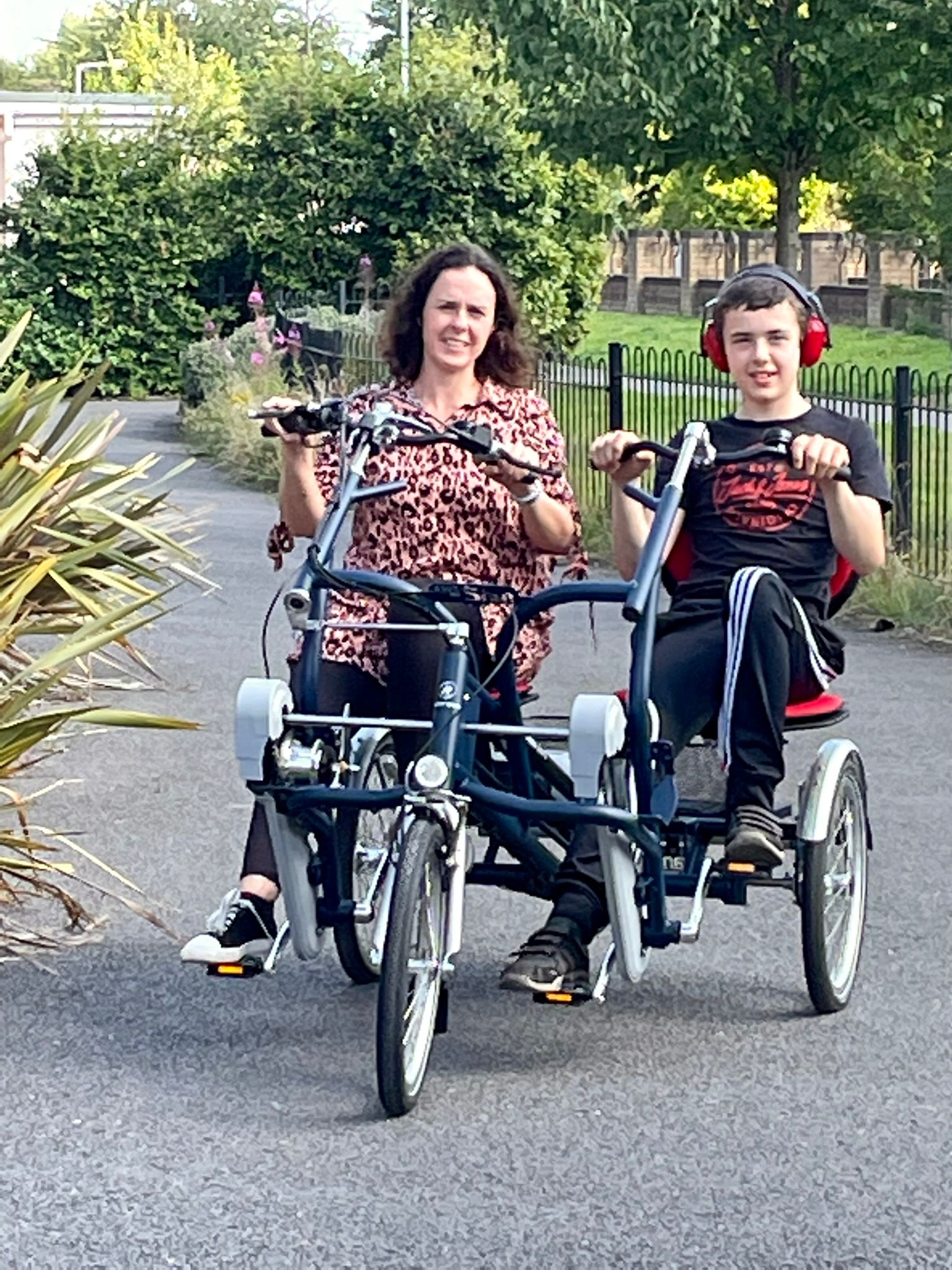 Claire describes how much of a positive impact the equipment has already had on them. She says:

“The trike has made a big difference and will continue to keep making a difference as he gets older too.

“Now if we’re in the house and I can sense that he’s getting anxious or he’s getting frustrated about something that is making him angry or upset, I can say come on let’s get out on the trike and change the setting for him.

“I’m not on edge or anxious anymore when we go out because I know he’s safe and he’s not going to run off. It’s quite peaceful and relaxing riding around sat next to him, we can both blow the cobwebs away.

“We just absolutely love it, it’s fabulous. It’s made both of our lives a lot easier.”

Sam, who his mum branded as full of energy and smiles, is unable to ride an average bike and cannot steer independently.

The teen’s occupational therapist recommended an adapted trike for the Wolverhampton family as Sam, who has the mental age of a three-year-old, has very high sensory needs and requires a lot of exercise and movement breaks.

Lockdown was especially hard for Sam, who is a member of an inclusive choir, as he has a lot of pent-up energy, which can result in self-harming behaviour.

“Sam’s at a difficult age where it’s hard to find things that he’s interested in doing and he needs an activity changing almost constantly to stop him getting frustrated. He doesn’t watch TV or use an iPad as he loses his patience with technology.

“So, having the ease of getting out on the trike and getting him moving is what we both really needed. It’s been amazing just to get out with him when things get difficult. We use it most days!

“He can share the trike with other people too and he’s been out with his carers on it too. It’s so simple to use!

“I don’t need someone else to be there to monitor the situation. We can just get out together and he’s happy to sit on it. It’s great to see him smiling as we’re cycling around the estate.”

Children Today Charitable Trust contributed towards Sam’s side-by-side trike and the remaining funds were raised online after the children’s disability charity set up a local appeal for the teen.

“With his trike his accessibility has increased to every day whereas before he’d only have access to trikes in school holidays.

“How amazing is it that Sam can now cycle like everybody else. Whenever he wants.”

Sam, who has limited speech but says ‘bike’ when he wants to go out on his new equipment, used to have a tandem bike, which wasn’t suitable as the teen, who was positioned behind his mum, would often put his hands down into the wheels while the bike was moving; as he liked the motion of them.

The Fun2Go trike, which has two seats and two sets of pedals, helps Sam burn off energy and has reduced the number of his outbursts.

Claire is set in taking the trike on a trip away with them in the future and is certain it will help them create lots more happy memories together.

“The incredible thing is, it’ll last him forever so knowing this is in place for him when he gets older is really reassuring. As he leaves school he’ll potentially be spending more time at home, so knowing the trike will be here for a long time to come is just amazing.”

Not only has the trike enabled them the freedom to get out and about whenever they feel like it, but it has become a topic of conversation when riding past people in the street.

“Everyone waves at us! As it’s such an unusual bike, people in the street ask whether they can have a go on it!

“With the trike we’re sat next to each other, we high five when we’re going around and we see new faces. It’s just wonderful.”