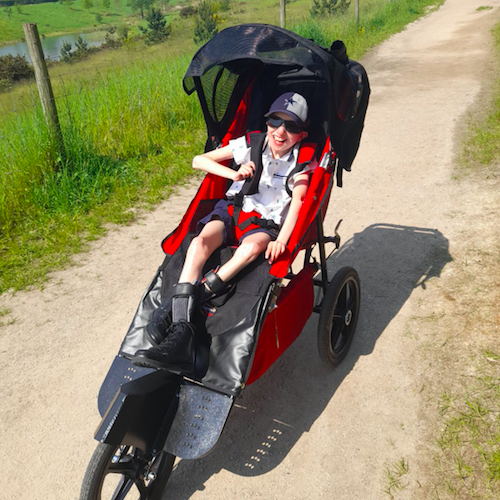 The feeling of sand between your toes, ice cream in hand and the soothing sound of the sea – there’s no place like the beach. For years this has been intangible for Tommy, who lives in Newark, as he’s been unable to access the uneven grounds of the beach or the woods in his wheelchair.

Since Children Today helped provide an adapted buggy for the 17-year-old, Tommy, who his family call a “social butterfly”, has been able to go out on much longer outings and has visited the beach for the first time since he was four. 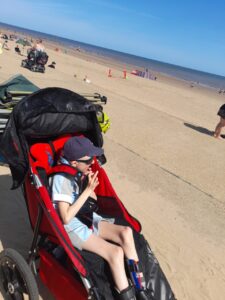 Tommy’s mum, Jo, describes how life-changing the three-wheeled equipment has been, she says:

“He absolutely loves it. He just wants to go in it all the time.

“We can go on longer walks now and visit wherever we want, which is great for Tommy as he hates staying in. It was like groundhog day before the buggy as we were just doing the same walks every day.

“We went to the beach with our family recently and it was so lovely for Tommy to enjoy being involved with everyone, instead of having to sit in a different place or me having to carry him down somewhere. Everyone loved pushing him around in his new buggy, Tommy had a brilliant time. It’s definitely had a big impact on both of our mental health.” 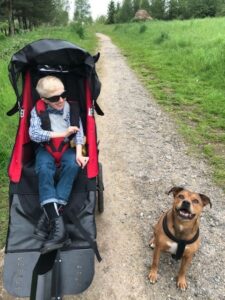 Tommy, who his family brand as “the happiest little chap you’ll ever meet”, has a partial chromosomal deletion disorder and is missing over 100 genes.

Tommy’s family said he squealed with excitement when he saw the Freedom for Kids equipment and he now points to it every morning.

“Tommy can now get out with us whatever the weather. He’s travelling in comfort and style and seems to feel like he’s even more famous than before! Tommy has always loved to be acknowledged by anyone and when people respond to his waves he explodes with joy.

“The buggy has not only given Tommy access to new terrain, new people and activities to watch but it has also now given Tommy a renewed enthusiasm for his greetings. He acts as if everyone should be as happy to see him waving as he is to bring a smile to their faces.

“We’re so grateful to Children Today for his new, stylish buggy.” 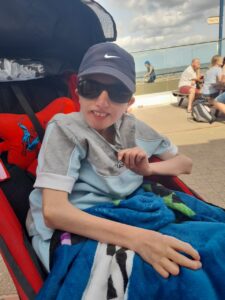 Tommy, who is unable to walk or talk, has even taken on a new role as a personal trainer for his mum! Jo adds:

“With the buggy I can run and push Tommy at the same time. When I’m out jogging with him Tommy laughs his head off – he thinks it’s hilarious. When I stop he’s started to do a running action at me because he wants me to carry on!

“There’s a lake by our house which we’d go around in Tommy’s wheelchair but the ground is really bumpy so it was really uncomfortable for him. We’d go around once and he’d had enough.

“We went up a few hills as well which we’ve never been able to get up before with his wheelchair, so we’re finding new routes around which is great to be able to give Tommy a change of scenery.

“So along with being able to access more places now with Tommy’s buggy, it’s also easier for him to be more involved in social situations, which is fantastic.”

Tommy and his mum, Jo, can now go on lots more adventures with his buggy

It’s certain that the equipment will accompany outdoor-loving Tommy on many adventures to come – including school trips.

His all-terrain buggy is so comfortable that Tommy will happily stay in it and play with his toys, eat his food and even drift off in it.

Children Today supported the Nottinghamshire family with help towards the cost of the life-changing equipment. The remaining funds were raised following an appeal, which the children’s disability charity launched for the teen. 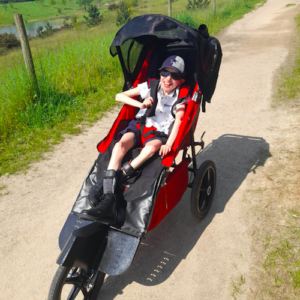 “To everyone who donated to Tommy’s fund – thank you from the bottom of our hearts.

“The all-terrain buggy has helped Tommy enjoy new experiences and for that we are truly grateful to each and every person.

“The happiness and also the comfort this provides Tommy is something so special and without you all that would not be possible. And thanks so much to Children Today, it’s been absolutely brilliant.”