A huge thank you to everyone who donated to Reece’s appeal. He’s now met his fundraising target for his trike!

On behalf of Reece, his family and from us at Children Today we want to say a massive thank you to those who shared and donated. You’ve played a part in changing this little lad’s life for the better.

The outstanding £1,699.00 raised online will go towards paying for the remaining costs of the teen’s adapted trike.
All funds raised above this amount will go towards helping more children, like Reece, who are in urgent need of pieces of specially adapted equipment.
Once again, thank you.
*Ends*

15-year-old Reece is short of funds to pay for a specialised trike which will enable him to seize life with both hands.

For the teen, who is described by his family as “very affectionate and loving”, having a specialised trike will mean he can get out of the house more.

In the past few years, walking has become a struggle for Reece. The youngster, who has autism, epilepsy and global development delay, is unsteady on his feet and has low muscle tone, meaning he gets tired easily. As he’s growing up and getting taller – he is no longer able to walk for long distances.

“We’d absolutely love a new trike that fits Reece properly so we can get him out more – we’re currently limited on what we can do with him.

“As he’s getting older it’s like his world’s getting smaller but we don’t want that to happen. At least with the trike we’d have another means of getting him out of the house; socialising, getting fresh air and exercising.” 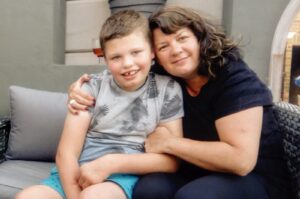 Children Today, provided Reece with a trike in 2014, which he has now outgrown. As Reece has poor balance he’s unable to ride an average bike.

Our charity has pledged to support the teen with a substantial amount to go towards the cost of the specialised equipment. But, the family, who has also contributed towards the cost, is still short of £1,699.00 to pay for the trike.

The Tomcat trike, which will last Reece way into adulthood, will not only allow him to spend more quality time outside with his family and friends, but it will also help him to get the vital exercise he needs to strengthen his muscles.

Reece, who loves to watch the world go by from his windowsill at home, has access to a trike at school but having a trike to call his own will be truly life-enhancing for the whole family.

The teen’s dad, Ste, said having the adapted equipment would be “absolutely brilliant”. He comments:

“It would enable us to get out with him. It would open up his world and he’ll be able to meet new people. He wouldn’t be cocooned in the house like he is now.

“As he’s got taller and bigger – walking has become more awkward for Reece and he doesn’t enjoy it like he used to.”

“We used to take him for walks, then he stopped liking going up and down hills so we started to take him on flat walks and even that has got too much for him now. He won’t walk that far at all, when he’s had enough he’ll just collapse to the floor.

“He doesn’t seem to be in pain, it just seems to be a struggle for him physically. As Reece can’t communicate with us how he’s feeling, we just try and avoid walking as much as we can now to be honest.” 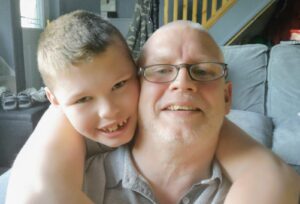 Reece, who loves to be outdoors, has no danger awareness so when his parents take him out – there’s always a worry that he’ll wriggle free from their grasp and run away.

With the trike, little Reece will be securely fastened in and his parents will be able to steer it using the handle at the back. The equipment will allow Reece and his family to enjoy quality time together after school, at the weekends and in the school holidays too.

“With the trike, it won’t be a struggle like it is now. He’ll be on it, enjoying himself and we can just walk alongside him.

“He probably feels restricted himself, with us having to hold his hand, it’s probably frustrating for him. But on the trike, Sharon can be by his side and I can be pushing from behind

“He’s got freedom then and we can all just relax instead of being on edge all the time. It’ll be a great benefit for him and us as well.” 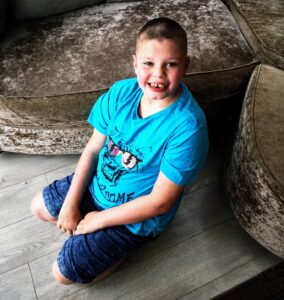 The youngster, who adores hugs and kisses from his family, recently tried out a Tomcat trike for size and his family described how he had a “big smile on his face” and it brought back happy memories of his old trike.

“We’d all be able to go out together and do simple things like taking the dog for a walk. At the moment one of us takes the dog out and the other one stays in with Reece.

“As he’s got a short attention span, he’s not interested in much so it’s been hard to keep him entertained and fulfilled, especially during lockdown.

“With the trike we’d all be able to get out together, every day. It’ll be wonderful.”

Any funds raised over and above what we need to provide this equipment will go towards helping fund vitally important equipment for other vulnerable children, like Reece.

Reece and his family appeared on our YouTube channel when we last supported him in 2014. You can watch it here: https://bit.ly/3hCWF7Q